This gap is here to allow you to see the text tool bar for the header bar below. When site is published, the gap will disappear

Challenges in the new stage of the Life Bioseville project:

1-Q: Good morning, Professor, I understand that the LifeBioseville project is relaunched with the US as the new coordinating partner of the project, having to distribute its tasks among the rest of the partners, how was the distribution of tasks? Are these tasks going to be developed without budgetary changes?
PA: Due to the problems of the previous coordinating partner, the project had to request an extension of one and a half years. In order to continue with the project, and with the same budget, the rest of the partners have had to reduce our budget in order to face the deficit that the previous coordinator left us. And we have shared the tasks between the US, which assumes the coordination of the project, and the CIEMAT, which assumes the tasks of dissemination.

3-Q: For the start-up of the prototype, once it is fully ready, you will need frying oil, where is this oil going to be extracted? How much will be necessary?
PA: During the start of the prototype and later, the frying oil will be proportional to the BIOSEL Company. This is an Andalusian company, authorized for the management of non-hazardous waste, which is dedicated to the collection of used vegetable oils. This company, through a physical treatment of frying oil, removes solids in suspension and water, for further processing into biodiesel. For the project we would need about 10 m3 of oil.

4-Q: One of the most important activities of the LIFE projects are the dissemination activities. What are the activities planned for the next conferences? Is it expected to present the work in a congress or conference?
PA: The US will present an oral communication this coming December in the Congress organized by the International Doctoral School.

5-Q: In the long term, and to close the interview, what do you think will be the main conclusions of this project?
PA: Among the main conclusions of this project are the development of a new technology for the production of biodiesel (which will be patented shortly), the reuse of a highly polluting waste such as frying oil, and, finally, the use of the glycerin obtained as a by-product in the production of biodiesel.

GENERA hosts the intermediate meeting of the LIFE BIOSEVILLE project

​European Aerosol Conference 2015 is one of the European conferences specializing in "aerosols", and the problems associated with these particles suspended in the atmosphere. In the last call of this international conference, held from 6 to 11 September in Milan (Italy), the LIFE BIOSEVILLE project was present through the participation of one of its members and the exhibition of a poster.

​Our goal is to produce a new biofuel on an industrial scale from used cooking oils. 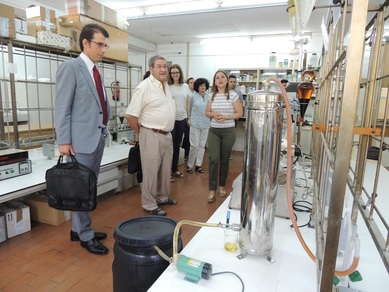 Seville, October 21, 2015. LIFE BIOSEVILLE project coordinator, CTAER (Advanced Technology Centre for Renewable Energies), has been oficially informed that Campo Sur Investiga S.L. will become the project ‘s new benificiary partner.
This will allow the project to resume its activity and meet the targets set out, which are, in general terms, the construction and demonstration of the technical and economic feasibility of a prototype to obtain high-quality biodiesel from used cooking oils in the city of Seville.

Campo Sur Investiga is a private company "dedicated to applied technological research whose main aim is to promote the use of natural resources for sustainable economic and social growth." The Andalusian company’s task will be to design, assemble and finalize the glycerin esters production prototype module  , which will enable industrial-scale production of a new biofuel from used cooking oil.

Campo Sur will be joining the consortium which carries out project LIFE BIOSEVILLE, which is made up of other four entities: CTAER, as the coordinating beneficiary, the University of Seville, CIEMAT (Centre for Energy, Environment and Technology, the Ministry of Economy and Competitiveness) and CARTIF Technology Centre.

The biofuel obtained will be used in Seville’s urban city bus fleet and its behavior as a fuel and its environmental emissions will be measured. This will allow identification of the environmental and public health benefits compared to fossil fuels.

This is how project LIFE BIOSEVILLE will go through an experimental phase to produce a new biofuel from used cooking oils, from the oil collection process to the application of the biofuel in the urban city bus fleet. The demonstration of this phase will enable technical and economic feasibility analysis, thus boosting the business network. For more information: info@lifebioseville.es

These pictures show the Biofuels laboratory in the Faculty of Chemistry (University of Seville), where biodiesel from used cooking oils has been produced at a laboratory scale. It has interesting technical, environmental and economic advantages, which now project LIFE BIOSEVILLE seeks to take to an industrial scale.

Image biofuels laboratories of the Faculty of Chemistry. University of Seville.

Can you imagine that the buses worked with biofuels from frying oils? This is already possible, but before being applied, improvements must be introduced, the result of which is to produce more efficient biofuels and through a sustainable and profitable production chain. To contribute to these improvements, the LIFE BIOSEVILLE project is carried out, which has the co-financing of the European Union and will have a final demonstration phase in the city of Seville.

Last Wednesday, October 1 was held in Seville, at the headquarters of the Andalusian Energy Agency, the launch meeting of the European LIFE BIOSEVILLE project, whose full name is: "New biofuel production technology to recover used frying oils and power the Seville's urban bus fleet ", and runs until September 29, 2017.

The consortium -which carries out the project- consists of five entities: the CTAER (Advanced Technological Center for Renewable Energies), as the beneficiary coordinator, the University of Seville, the CIEMAT (Center for Energy, Environmental and Technological Research, of the Ministry of Economy and Competitiveness), the CARTIF Technological Center and the company Campo Sur Investiga SL.

The project budget amounting to 1,543,600 €, has a European contribution of 756,870 €; and it lasts for three years, from October 1 to September 29, 2017. It is part of the new projects approved by the European Commission at the end of last April, with charges to the environmental fund of the European Union, channeled through the LIFE program. More information: http://europa.eu/rapid/press-release_IP-14-486_en.htm
The general objective of LIFE BIOSEVILLA is "the development of an integrated and sustainable system for the valorization of frying oils generated in the city of Seville through the production of a new biofuel made up of methyl esters and glycerin esters that is more competitive and efficient".
(More information: http://www.ctaer.com)

The presentation of the project was in charge of Valeriano Ruiz Hernández, General Director and Guadalupe Pinna, Director of Promotion and Technological Transfer, and of the representatives of the partners: Paloma Álvarez and Elisa Martín of the University of Seville; David Diez and Ana Urueña from the CARTIF Technology Center; Carmen Barrios and Aida Domínguez by CIEMAT.
Contact: info@lifebioseville.es