This gap is here to allow you to see the text tool bar for the header bar below. When site is published, the gap will disappear

Dissemination of the project

March 22nd, 2019.- The final meeting of the European project LIFE_BioSeville, which has been held at the Mexico Pavilion of the University of Seville in Seville had as its objective "The development of a management system,  of frying oils for the production of a new fuel, which will be tested on public buses in Seville ".
All partners of the LIFE BIOSEVILLE consortium: the University of Seville, the CARTIF Technology Center, the CIEMAT (Center for Environmental and Technological Energy Research), and Campo Sur Investiga SL have presented the results of each of their actions within the project before the representative of the European Commission, Filipa Ferrao. Who showed great satisfaction at the conclusion of all the actions of the project that ends. Especially for the operation in optimal conditions of the prototype of biodiesel production from frying oil.
The meeting in which all the partners and the expert in follow-up of LIFE projects, Ms. Filipa Ferrao, could see the operation of the prototype, was developed in Gerena, in whose industrial park the SME CampoSur Investiga SL carried out the detailed engineering of the new biodiesel production technology on an industrial scale, which is one of the most important results of this project.
The entire LIFE BioSeville Project consortium would like to thank the LIFE Instrument team, especially Don Santiago Urquijo, Representative to the European Commission, and Ms. Filipa Ferrao, Monitoring expert LIFE, for the support that has made possible the successful completion of this project, which for different unforeseen reasons became a challenge for the entire consortium. Challenge complete!. Congratulations to all! 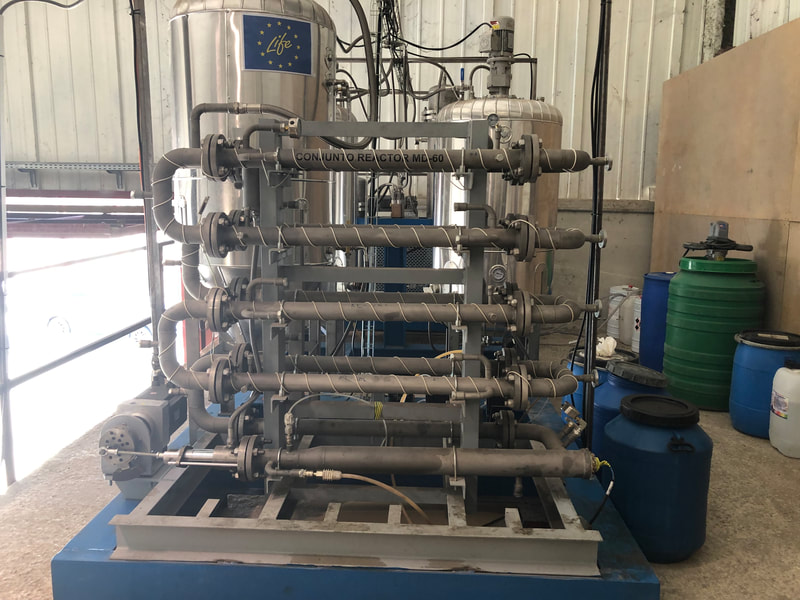 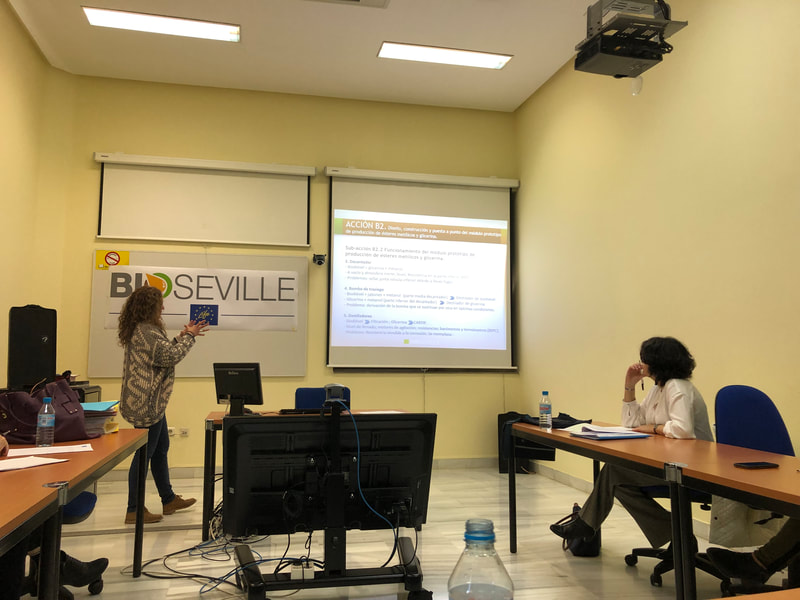 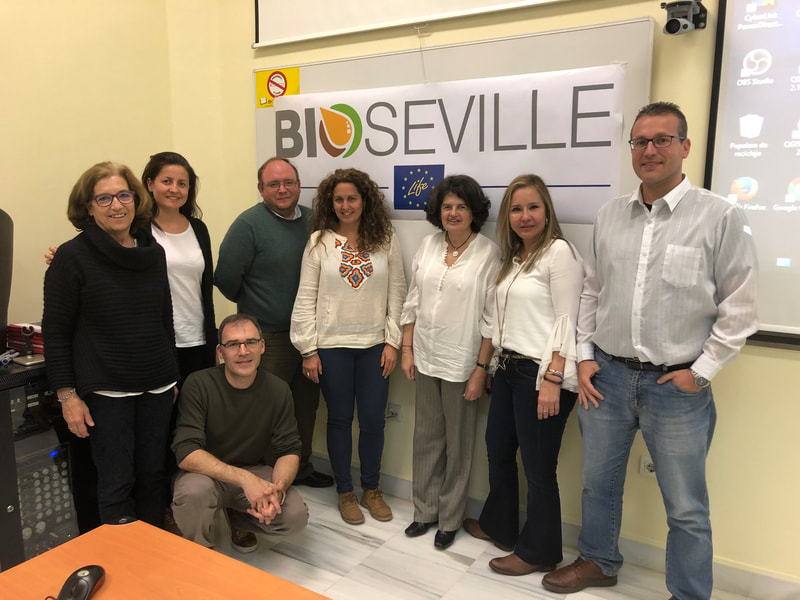 During the Week from January 21 to 25, 2019, the CIEMAT - Moncloa team traveled to the City of Seville to carry out the last Measuring campaigns for gas and particle emissions emitted by a bus from the TUSSAM fleet, within the work that CIEMAT carries out in the LIFE BioSeville European Project. In this campaign three different types of fuels were tested, including the use of the oxygenated additive obtained from the glycerin product of the process of obtaining the biodiesel from frying oil, this supposes the application of the circular economy to waste oil used, since the main waste of the esterification of these oils is reused to convert them into biodiesel, glycerin. This product that until now has been used mainly in the cosmetic industry, but due to excess production was becoming a problem, now may have another outlet to the market as an oxygenated bio-additive that contributes oxygen to the combustion process, improving its efficiency. 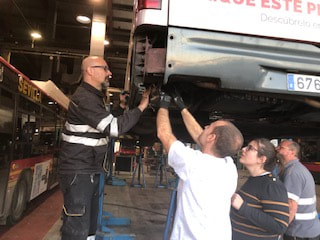 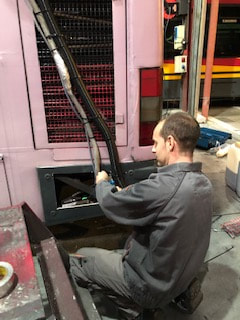 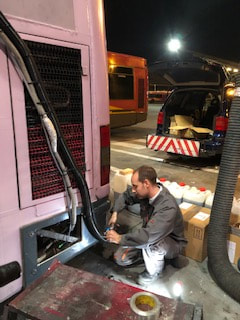 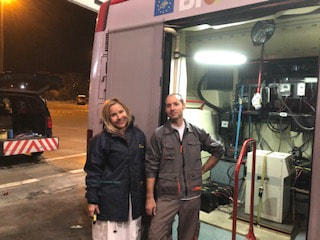 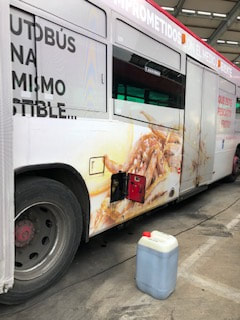 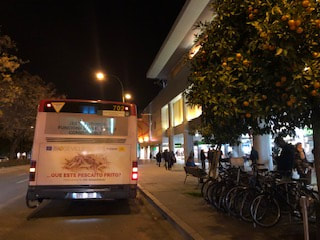 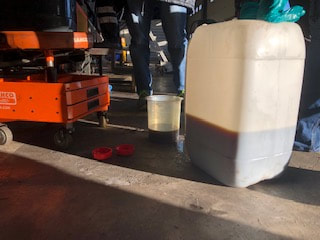 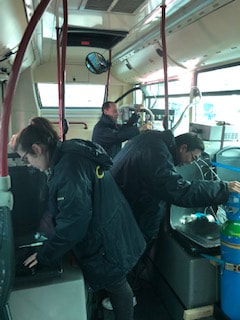 Today the representatives of the BIOHEC and BioSeville projects met to share experiences and results of their respective projects. The BIOHEC project - Advanced Biodiesel in circular economy for low carbon public transport - shares thematic with the LIFE BioSeville project, so the visit has also served to do networking and exchange synergies strengthening links and knowledge. During the meeting in which they participated, on behalf of the working group of the Life-BIOHEC Mathilde Mosse (Pour la solidarité - France) Michel Millares (company GECCO) and representing the work group of the Life-BioSeville Carmen Barrios Sánchez (CIEMAT) and Manuel Pujadas (CIEMAT), the group had the opportunity to discuss how to improve the partial results obtained to date, in common problems such as the collection of used oil and the optimization of biofuel quality, in addition to the importance for the great impact on the quality of the environment has the work that both groups do and how satisfying it is.

On July 19, 2018, the LIFE BIOSEVILLE project was presented in the TUSSAM garages with the presence of the Delegate of Mobility, Security and Major Festivals Juan Carlos Cabrera, the Director-Manager of TUSSAM Rubén García, Antonio Gómez, Director of Institutional Relations and members of the research team such as Paloma Álvarez Mateos Professor at the University School, Juan Francisco García, a lecturer hired Doctor, Lidia García Titled Superior, hired by the US for the project, Montes Vasco Maguillo Higher Degree by the company Campo Sur Investiga SL and Carmen Barrios Sánchez I.P. CIEMAT, Manuel Pujadas Cordero, head of the Pollutant Emissions Unit, Aida Domínguez Sáez, researcher and José Alberto Sánchez, lab technician, from CIEMAT, who are carrying out the necessary work to make this innovative initiative a reality, as buses of Seville use biofuels from frying oils.
​
TUSSAM has signed a collaboration agreement with the University of Seville, to be an active part of the LIFE BIOSEVILLE project, so that in the first half of July, a bus of the TUSSAM fleet has carried a striking comprehensive publicity having made tours in three lines of the network with researchers on board who have measured the polluting emissions emitted by the bus, both with conventional diesel and with the new Biodiesel B30 obtained from the frying oils of the Sevillian hotel industry. These measurements will be extrapolated to the reduction of the global emission of pollutants from the TUSSAM fleet that would imply the use of this new biodiesel in buses with diesel engines. Read more ...

On May 23, 2018, the Technical Seminar of the Life BioSeville Project was held in the CIEMAT meeting room, where the progress of the project was presented and experts from different areas directly related to the topic addressed in the project were gathered. draft. In the following links you can download the presentations of the different speakers.
.

Presentation of the Project coordinator. Dr. Paloma Álvarez Mateos. US

The European Commission today approved the financing of 225 new projects under the LIFE + program, the European Union's environmental fund. The selected projects were presented by beneficiaries of the twenty-eight Member States and cover initiatives in the fields of nature conservation, climate change, environmental policy and information and communication on environmental issues throughout the EU. Together they represent a total investment of some 589.3 million euros, of which the EU will finance 282.6 million euros. Source: Read more ...

Seville, May 7 (EFE) .- Four of the 68 LIFE projects approved by the European Union (EU) among those presented by Spain in the last call will be held in Andalusia, according to the data of this community program to which it has had EFE access.
Three of these LIFE projects refer to activities related to purification and recycling, considered suitable for the mitigation and prevention of climate change, while the fourth is related to the preservation of ecosystems.
Source: Read more ...